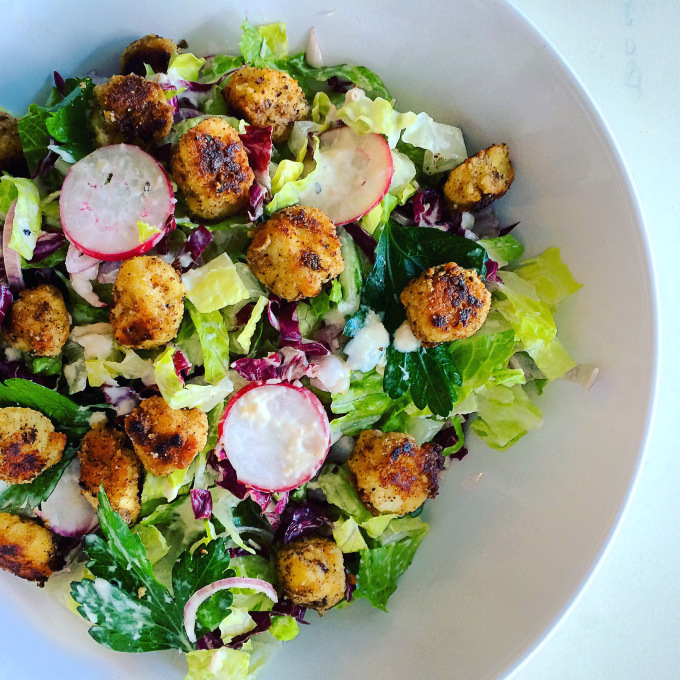 I ordered a Caesar salad for lunch one day and it was spicy, not chili spicy but it had some sort of heat to it. I asked the waiter what was in the dressing and he said horseradish. What I great idea, so I went to the store and picked up a bottle of horseradish and made the salad again while the flavours were still fresh in my mind. I however wanted to play up the sharpness of the dressing with the vegetables, so added radishes and onions. I used parsley like lettuce with the romaine and radicchio instead of as its usual garnish.

I also wanted to make it a meal, which typically includes a grilled piece of chicken, and Caesars always have croutons. I put those two ingredients together and made chicken croutons. I have to admit, this was better than the one I had in the restaurant. 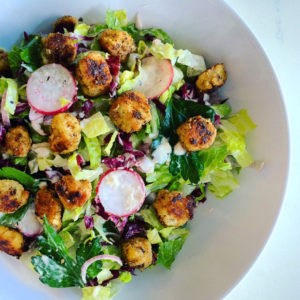 I know the Caesar dressing is not homemade, but it doesn’t have to be. I could make my own, but I really like the Renee’s dressing so I doctored it up. You can make your own Caesar dressing or use your favourite. The key ingredient here is the horseradish. I made this low carb by using coconut and almond flour for the breading. Flour and breadcrumbs can be used instead if you’re not going low carb. Alternatively, you can also use popcorn chicken as the chicken croutons if you don’t want to make them from scratch.
Filed Under: Chicken, Low Carb, Lunch, Salads
Tags: breaded chicken, caesar salad, Chicken, chicken caesar, dressing, horseradish, keto, lemon, Low Carb, parsley, radicchio, radish, red onions, romaine
SEED & SPINACH BISCUITS
CHARRED BROCCOLI KIMCHI SALAD